It is of the utmost importance to prevent terrorism. This is due to the fact that a terrorist attack often has serious consequences, such as the loss of life, widespread material damage and emotional impact (such as anxiety). And because of the damage an attack or threat causes to the democratic process and legal order. The National Coordinator for Security and Counterterrorism (NCTV) coordinates the fight against terrorism in the Netherlands.

The approach to counterterrorism is defined in the national counterterrorism strategy. The objective is to reduce the risk of terrorist attacks and to limit any damage following a possible attack. The NCTV coordinates the efforts of all parties in the Netherlands that have a role in counterterrorism. In combatting the current threat of jihadist terrorism (violent extremism), the NCTV coordinates the implementation of the Netherlands comprehensive action programme to combat jihadism. The NCTV also cooperates with other governments and in international partnerships, such as the European Union and the United Nations.

The NCTV develops various products that are, at a strategic level, essential in the fight against terrorism. One of the most important products is the Terrorist Threat Assessment Netherlands, which indicates the likelihood of a terrorist attack in the Netherlands. There is also the Counterterrorism Alert System that warns government institutions, police, emergency services and business sectors against a (possible) terrorist attack.

Threat level lowered to 3; attack in the Netherlands conceivable 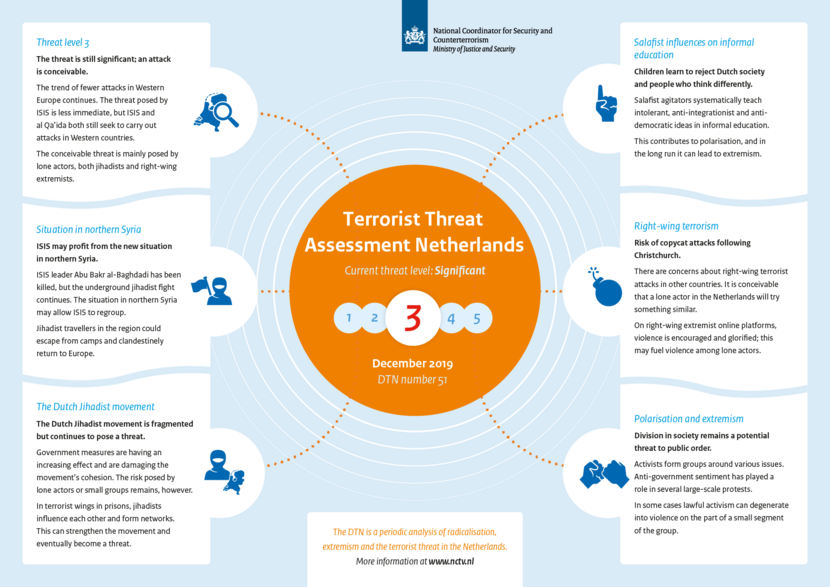 The National Coordinator for Security and Counterterrorism (NCTV) has determined the terrorism threat level to be 3 on a scale of ...

There is a real chance of a terrorist attack in the Netherlands. The threat level therefore remains at 4 (on a scale of 1 to 5). ...

Update 18.45 Threat level reduced to level 4 in province of Utrecht

The NCTV has reduced the threat level for the province of Utrecht to level 4. Motive is the arrest of the main suspect of the ...

Over the past year the threat situation in the Netherlands has been unsettled, partly due to the discovery of plans for a complex ...

The translation of the NCTV report ‘Fluctuating waves of right-wing extremist violence in Western Europe. The nature, severity ...

On Thursday the police arrested seven men, thereby eliminating a concrete threat posed by a terrorist network. As ever, though, ...